On Sunday, October 13, in the opening match of the day on the second court the Estoniantennis player Kaya Kanepi reached the finalsof the women’s tournament «VTB KremlinCup 2019» qualifications as her opponent – the Ukrainian Anhelina Kalinina - withdrew due to a right wrist injury at 1/4 in the first set. In the next match the Estonian will face Tereza Martincova from the Czech Republicwho outplayed her opponent Jana Fett from Croatia in straight sets – 6/2, 6/2. In the second set Martincova broke at 3/2 and thenclosed out the match breaking again at 5/2. 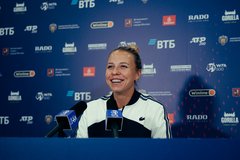